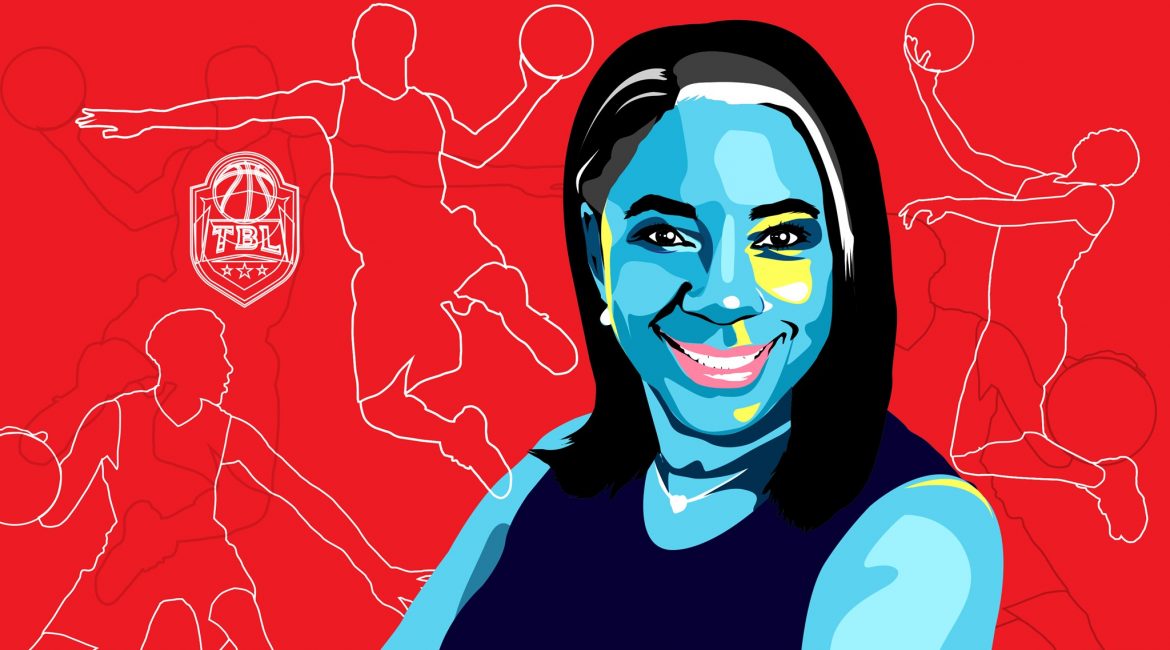 Evelyn Magley remembers sitting on the floor of her bathroom, crying and feeling lost. She didn’t know what she was supposed to be doing with her life. She felt helpless watching her husband struggle as part owner of a minor basketball league. She remembers asking God for answers: How could all her life and work experience be put to good use?

That night in 2018 she heard a voice reply: “Start your own basketball league.” She ran into the bedroom, woke up her husband and shouted out her idea — they would strike out on their own. Then she stayed up all night planning The Basketball League (TBL). America’s newest men’s professional basketball league debuted in January in 10 cities across the country with Magley as CEO, and the couple owning the whole enterprise. Magley, 61, is now the first woman to own a professional men’s sports league in the U.S. Upon hearing of her being the first, Magley replied: “Well, it’s taken long enough.”

Magley’s journey has two constants: sports and music. Growing up in Rosedale, Kansas, she always played the violin and began running track in high school. She joined the track team at the University of Kansas, but she had to quit after being diagnosed with sickle cell disease. She graduated with degrees in music education and music therapy, then founded an inner-city music ministry for children. She later became the director of community engagement for the Brampton A’s of the National Basketball League of Canada.

While the decision to launch a league came out of the blue, Magley says she’s learning as she goes, along with her husband, league president and former NBA player David Magley.

Female CEOs of any stripe still remain about as rare as wins for the Cleveland Cavaliers this year; about 5 percent of CEO positions in the U.S., U.K. and Europe are held by women, according to a recent study. In men’s sports, they’re even rarer. Susanna Dinnage was to become CEO of England’s Premier League, the soccer behemoth, but she backed out late last year. A small but growing number of women are climbing the executive ranks of men’s basketball, including Indiana Pacers assistant general manager Kelly Krauskopf, NBA players’ union executive director Michele Roberts and Los Angeles Lakers co-owner and president Jeanie Buss. Magley’s tale is “empowering and encouraging” to Tamara Tatham, the first Canadian woman to coach in the NBA’s G League, now a mentor coach for the Raptors 905.

Magley has the added pressure of running a startup, vying to compete on the margins of professional hoops and unaffiliated with the NBA. David Magley does bring some experience to the table: he was commissioner of the National Basketball League of Canada and then helped launch the North American Premier Basketball League (NAPL), which began play in January 2018. But David Magley had a rocky partnership with Dr. Sev Hrywnak, a Chicago podiatrist, and their one season ended with Magley buying out Hrywnak and folding the league. Then came Evelyn’s epiphany, and the Magleys decided to start anew.

The TBL brought in five teams from the NAPL and added five expansion franchises, attempting to make a splash in markets from San Diego to Owensboro, Kentucky. It attracts lower-tier players eager to play ball as a full-time job — though not a lucrative one. Players make anywhere from $1,500 to $7,500 monthly depending on their contracts. Each team will play a 32-game schedule, all broadcast via livestream.

The TBL currently has more than 20 major sponsors and partners, including BSN Sports apparel, Baron Championship Rings and The Rock (the league’s official ball). It is on the hunt for more sponsors, investors and team owners as it hopes to grow to more than 20 cities across the U.S. in the next five years.

What makes this new incarnation stand apart? Evelyn Magley’s values. “Our main focus, of course, is developing our players,” she says. “But that means developing them on and off the court with a focus on community and building self-esteem. Using the visibility of a professional league to impact the community in a positive way.”

Magley is moved to tears describing how players on the Kentucky team came up with an idea to each pick a local charity and compete all season to see who can raise the most money. The league is also incorporating a not-for-profit branch, and players have mandatory life lesson skills and volunteer hours, which Magley imagines including speaking at school assemblies to reach kids in a way other adults cannot.

There’s a business motive here too: those students turn into fans in the stands along with their parents.

But Austin Karp, the managing editor at Sports Business Journal Daily, says ticket sales alone won’t cover all the costs of a professional league. “It’s the travel schedule that really blows my mind about this league,” Karp says as he looks at the teams’ locations in Florida, Arizona, New York and more. “I’ve seen leagues like this pop up in the past trying to target markets an NBA team, a G League team or a big college team doesn’t target. It’s a crowded market, it’s tough.”

Karp thinks the best model for an alternative league would be akin to the BIG3: a traveling tournament where all the players move together from city to city to draw a curious crowd. Rodney Fort, a sports economist and professor of sports management at the University of Michigan, says TBL’s only hope is to be swallowed by a bigger fish. “Unless they can convince a dominant league like the NBA or the [G League] that these teams are worth having, and getting them assimilated into the league, they won’t last,” Fort says.

But Magley can trace perseverance against long odds back generations: in 1862 her great-great-great grandmother gave birth to the son of a slave owner, but the boy was still born a slave. Magley’s mother was in the first graduating class of the University of Kansas Medical Center’s nursing program in 1951, one of the only African-American women in the class.

It carries onto the next generation: Both of Magley’s daughters were Division I athletes, and daughter Jennifer played professional tennis before becoming a fitness and lifestyle entrepreneur and motivational speaker who credits her mother for her work ethic.

“I look at the heritage of my family: People died for me to have this opportunity,” Magley says. “I need to step up. I want to leave a legacy for, not only my family and for my daughters, but for Black women in America.”